Myself (left) and my cousin Radley on our ponies, not far from Bly, Or.

I grew up on a cattle ranch on the other side of the hill from a town called Bly, Oregon. Through the years I would get vague accounts of a tragic incident that happened many years ago
on a hill rich with hunting and fishing called, “Gearhart Mountain.” A recent NPR podcast had sparked my interest in the
historical event and set me to begin researching even deeper what had occurred seventy years ago in my backyard.

On May 5, 1945 Bly Oregon was the site of the only fatalities of World War II on the mainland United States due to enemy attack. Archie Mitchell, pastor of the Missionary Alliance church in Bly had done what many small town pastors had done in my youth on a Saturday morning.  He rounded up the kids from the church and took them on an outdoor picnic and fishing adventure. Squeezing 5 kids into his sedan along with his twenty-six 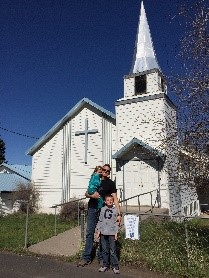 year old pregnant wife Elsie they set off to the hills for an afternoon of fun. As they arrived, the children piled out of the car and began to run and explore, Elsie not far behind keeping watch, Archie left at the car to pack the fishing poles and picnic basket by himself.  As the kids went into the tall pine trees they discovered an object partially hanging from low branches, partially resting on the ground and they beckoned Pastor Archie and Elsie to come see. Just as Archie

shouted, “Don’t touch it, let me have a look first” the object exploded, shooting shrapnel in all directions including into the group of curious children, the mother and her unborn child, and the neighboring pine trees. Archie was knocked down, but quickly ran to
the injured. The fire consuming Elise’s dress was quickly extinguished by Archie at his arrival. Elsie used her final breaths to whisper something into Archie’s ear

before she was gone. All five children ranging from ages 11-14 were killed in the explosion.
History would later make clear that the explosion came from a technically elaborate balloon bomb that had made its way

across the Pacific Ocean along with thousands of others in an effort to strike terror into US citizens, and distract them from the war effort with domestic emergency work as they tried to combat flames consuming natural resources. The balloon had found its resting place in the Forest of Gearhart Mountain while others made it to farther distances such as Montana and Wyoming.

t the Missionary Alliance church, visiting with local folks and then on to the site of the explosion. The site of the blast has a monument with the names of the victims inscribed, and pine trees that were present at the tragedy still have fragments of shrapnel pock marking the bark. Citizens of Japan have even visited the monument and have left flowers and expressions of sorrow for the ravages of war and the innocent ones who are affected.

A tree just next to the blast zone, peppered with shrapnel marks.

I read a few more articles regarding the incident, hearing the last names of children that were well known in our small community, when I came across a special page on the Missionary Alliance website dedicated to Pastor Archie Mitchell. It was in this article that Archi rose in my book from the place of “unfortunate man involved in horrible tragedy” to “an Epic Hero of Christian Missionary work.”

I have written articles in the past explaining the current state of world missions. How that out of some 7 billion people in the world, nearly half of that number is what is considered “unreached
people groups” having less than 2% of their culture “born again Christian.” It is estimated that nearly half of that number, some 1.75 billion people are considered “unengaged un-reached” meaning that in the two thousand years since Jesus said, “go unto all the world and preach the gospel” there has been no active gospel spreading work taking place among that indigenous people group. This is where the story of a small town preacher who would invest in the lives of the children of his community gets even more interesting! 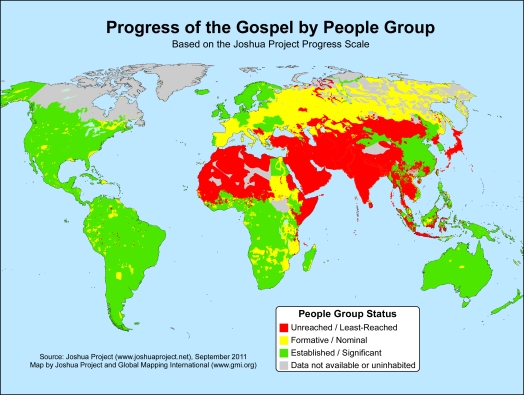 fter two years of recovering from the explosion that rocked his world, taking his young wife and unborn child, as well as a
substantial part of the young ones in his church, Archie Mitchell would marry a woman named Bette Patzke, a woman who

lost a sister and brother by the same bomb. Two days before Christmas, Archie and Betty sailed to what was then called Indo-China where they served for two terms at the school for Dalat, Vietnam. During their third term in 1962, while serving in a leaper hospital and finishing up a midweek prayer meeting, the doors were broken through by Viet Kong soldiers pointing weapons at the missionary workers. They demanded the workers and doctor Ardel Vietti come with them. Archie was able to reason with the soldiers that the doctors and workers would leave peaceably if the mothers and children could stay in safety. The

soldiers obliged Archie’s request. Betty and the children remained working among the leprous. The Mitchell children would be raised among the lepers and eventually come back to the states to continue their education.  Archie and the other doctors who were taken by the soldiers were never seen again.

In April 1975, Betty and six other missionaries were taken captive by the Viet Cong.  They were held captive for nearly 10 months where they battled illness and rough treatment but were eventually released. Betty Mitchell has continued in various forms of missionary work, including in North Carolina with the Dega people who are a Vietnamese tribal group that had resettled in the States. 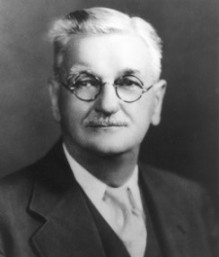 The Alliance weekly from April 10, 1920 writes of an earlier pastor, “Rev. R.A. Jaffray accompanied by his wife [Minnie], [who] recently made a trip into Indo-China (Annam [now Vietnam]) covering about six weeks. They hoped to be able to open the first chapel in Saigon [now Ho Chi Minh City] and to make a tour into the utterly untouched country of Cambodia, where there is no work at all. Mr. Jaffray writes: “Here are 1 million souls for whom Christ died, and, after 1,920 years, not one of His messengers has gone to them with the story of free salvation. May He help the Alliance to give them a chance ’ere the Lord return.” Jaffray would be arrested by the Japanese during the invasion of Indonesia, placed in an internment camp where he would die from illness and malnutrition on July 24, 1945, less than a month before the Japanese surrender.

Upon hearing of the Mitchell’s life of sacrificial gospel service, I couldn’t help but imagine what it would have been like to lose a wife to an Asian enemy, remarry a relative of victims from that same tragedy, and soon after tell their family and a hurting and bitter community that I will be taking my new family to Asia where I will lovingly serve the lost and hurting, the people who would eventually go to war with the United States in a separate conflict. I can only imagine the encouragement and pleading of friends, family and community members to stay in the United States and continue ministry work here locally and safely, as it was needed as well. 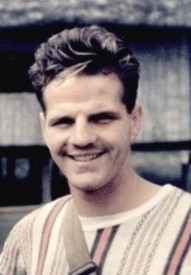 It’s the same pleading Oregon wrestler Jim Elliot received when He was told to forsake global missionary ambitions, that America needed good preachers too! His reply was, “He is no fool who gives that which he cannot keep, to gain that which he cannot lose.” He was soon after martyred along with five of his friends by the Alca natives in Ecuador. The extremely wealthy and well educated C.T. Studd, member of the Cambridge seven cricket team, was reprimanded for his choice to leave a comfortable life for gospel service in China would say, “If Jesus Christ be God and died for me, then no sacrifice can be too great for me to make for Him.”

John Patton who would go to the New Hebrides Islands and lose wife and child while ministering among the cannibals would be told by and elder in his church, “John, you’ll be eaten by cannibals!” to which he replied, “Mr. Dickson, you are advanced in years now, and your own prospect is soon to be laid in the grave, there to be eaten by worms; I confess to you, that if I can but live and die serving and honoring the Lord Jesus, it will make no difference to me whether I am eaten by Cannibals or by worms; and in the Great Day my Resurrection body will rise as fair as yours in the likeness of our risen Redeemer.”

I am stirred to radical global and missional action by this local hero Archie Mitchell, his family and his legacy. A legacy that goes back to the true and better hero, Jesus Christ who left the comforts of His throne in heaven and the rich fellowship of the Father and Spirit to dwell among men who hated Him and spitefully abused Him to the point of death that the world might be saved. May we too lay down our comfort, status and lives for the salvation of Christ Jesus to be known among all the nations.